Health sector programs often have important policy objectives relating to the reduction of unfair health inequality, as well as the improvement of total population health. Health inequality reduction objectives are particularly common in public health decision-making, for example, in relation to screening and vaccination programs, and are sometimes also relevant to decisions regarding the introduction and delivery of new medicines, surgical procedures, and other health technologies.

The key steps in the DCEA framework outlined below are: estimating the baseline health distribution in the general population; modeling changes to this baseline distribution due to the health interventions being compared, and using this to estimate the mean change in health due to each intervention; adjusting the resulting modeled distributions for alternative social value judgments regarding fair and unfair sources of health variation; using these adjusted distributions to estimate the change in the level of unfair inequality due to each intervention; and finally combining the mean level of health and level of unfair inequality associated with each intervention by using an appropriately specified social welfare function to rank interventions, and decide as to which best fulfills the dual objectives of maximizing health and minimizing unfair health inequality.

The first step in DCEA is describing the baseline distribution of health in the general population, taking into account variation in both quantity and quality of life among different subgroups in the population as defined by relevant population characteristics. A natural health metric to use in this context is quality adjusted life expectancy (QALE) at birth, though other suitable health metrics can be used – such as disability adjusted life expectancy at birth or age-specific QALE – so long as they are on an interpersonally comparable ratio scale suitable for use within CEA. Mortality rates and morbidity adjustments differentiated by relevant population characteristics are required to estimate this distribution. Figure 1 shows the estimated baseline population health distribution in the UK in the year 2010 as measured in QALE at birth, taking into account differential mortality and morbidity by age, gender, and area level deprivation. 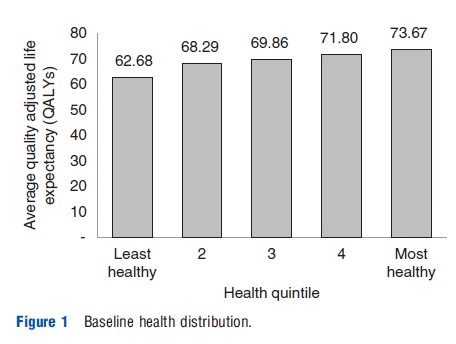 Estimating The Distribution Of Health Changes Due To The Intervention

Measuring The Level Of Inequality In The Estimated Health Distributions

The overall health distributions associated with each intervention can be assessed in terms of the level of health inequality they comprise. There are a number of commonly used indices for measuring inequality in the distribution of income, which can also be applied to health when measured on a ratio scale such as quality adjusted life expectancy. These indices are based on a common set of fundamental principles:

Although all reasonable inequality measures satisfy the principle of transfers, a measure cannot fully satisfy both scale independence and translation independence. For example, if everyone in a health distribution gains 25 years in life span the absolute gap between any two individuals remains the same, a relative gap between two individuals living 60 and 50 years respectively of 20%, however, declines into a relative gap of only 13%, with these individuals living 85 and 75 years after the gain in life span. When selecting inequality indices to rank distributions, it is important to recognize these distinctions and identify those that most closely represent the concept of inequality of relevance in the context of the decision being evaluated.

The purpose of DCEA is to identify the health intervention that results in the best improvement in both average health and unfair health inequality in the population. The distributions of health estimated thus far represent all variation in health in the population. However, some variation in health may be deemed ‘fair’ or, at least ‘not unfair,’ perhaps because it is due to individual choice or unavoidable bad luck. The health distributions should therefore be adjusted to include only any health variation that is deemed ‘unfair’ before measuring the level of inequality. The DCEA framework allows multiple sources of unfair health inequality – for example, by income, education, ethnicity, geography, and other factors – to be analyzed in the same model. If decision makers are interested in one particular source of unfair health inequality, this can also be analyzed separately, or by decomposing the influence of this factor on overall unfair inequality. To make these adjustments for unfair sources of health variation, the association between relevant population characteristics and the estimated health distributions must be modeled. Social value judgments then need to be made regarding whether or not health variation associated with each of the population characteristics is deemed fair. The modeled associations combined with these social value judgments are used to isolate unfair variation in the distribution, using either the methods of direct or indirect standardization. Inequality measures can then be used to assess the level of unfair inequality in the estimated health distributions associated with each health intervention and hence to rank health interventions by their impact on minimizing this inequality.

Once both the mean level of health and the fairness adjusted distribution of health associated with each of the interventions have been estimated, social welfare functions (SWF) can be used to compare interventions. Several properties are considered useful when constructing a SWF. In describing these properties, one can use the terminology hiA to represent the health of individual i in health distribution A, Ui to represent an individual utility function for individual i, and W to represent social welfare:

These properties can be used to derive rules to help determine which of two health distributions are preferable. By using these dominance rules, the exact nature of the SWF need not be specified but can instead be described by broad characteristics that encompass whole classes of SWFs, under any of which the welfare rankings of particular interventions would be the same. The following rules are listed in order from least restrictive to most restrictive that allow a partial ordering of health distributions:

These dominance rules may be used to rank the estimated distributions associated with the health interventions being compared and hence to rank the interventions in terms of social welfare. These rules do not, however, allow for trading off between health inequality and overall health and hence will only provide a partial ranking of interventions when rankings on these two objectives do not coincide.

Summing across this population gives the Atkinson index of social welfare:

where the parameter ε, which can take any value from zero to infinity, specifies the level of societal inequality aversion.

The higher the e, the further the index tilts toward concern for health improvement among less healthy individuals rather than more healthy individuals. A value of zero represents a classic ‘utilitarian’ view that all that matters is sum total health and not inequality in the distribution of health. Although as the value approaches infinity, the index comes to represent the ‘maximin’ view that all that matters is the health of the least healthy individual, irrespective of the health of all other individuals. The proportion of mean health that can be sacrificed to achieve equality will increase as the level of inequality aversion rises.

Summing across the population, this gives the Kolm leftist index of social welfare:

where the parameter a specifies the level of societal inequality aversion, with higher a values making the index more sensitive to changes at the lower end of the health distribution. The value of this index represents the absolute amount by which average health could be reduced to achieve equal health for all. As with the Atkinson index, the amount of mean health that could be sacrificed to achieve an equal distribution rises with the level of inequality aversion.

Having fully specified the SWF, all interventions can be compared and ranked on the combined objectives of maximizing health and minimizing unfair health inequalities in the population. Conclusions on which intervention is best may be sensitive to alternative social value judgments made both in the fairness adjustment process and in the specification of the type and level of inequality aversion. These social value judgments should ideally be made by the appropriate stakeholders through a deliberative decision-making process, and the robustness of conclusions to alternative plausible social value judgments should be explored.

There are a number of alternative methods proposed in the literature for including health inequality concerns in economic evaluation. These typically involve either weighting health gains differently for different groups in the population or weighting overall health gains directly against overall changes in heath inequality. Both these types of method can be replicated using the DCEA framework by imposing the relevant restrictions on the fairness adjustment process and on the form and parameters of the social welfare function.

An important emerging source of empirical literature on incorporating health inequality impacts into economic evaluation in low and middle income countries is the ‘ex- tended cost-effectiveness analysis’ work being developed by Dean Jamieson, Ramanan Laxminarayan, and colleagues as part of the Disease Control Priorities 3 project (www.dcp-3.org). Their approach to distributional analysis is similar in spirit to the approach outlined in this article, although simplifying the analysis by (1) focusing on a single distributional variable (wealth quintile group) rather than analyzing multiple distributional variables, (2) setting aside the issue of opportunity costs falling on the health budget by assuming that the intervention is funded by the tax system, and (3) presenting results as a disaggregated ‘dashboard’ of costs and consequences by social group rather than using inequality indices and social welfare functions to analyze tradeoffs between improving health and reducing unfair health inequality explicitly. However, their approach takes a broader perspective than standard CEA by incorporating financial risk protection benefits as well as health benefits. It therefore points the way toward the next great methodological challenge in this area: developing methods of ‘distributional cost-consequence analysis’ and ‘distributional cost-benefit analysis’ for incorporating health inequality impacts into economic evaluation of cross-government interventions with important nonhealth benefits and opportunity costs.