As a vehicle for economic evaluation, model-based cost-effectiveness analysis offers major advantages over trial-based analysis. These include the facility of models to widen the set of options under comparison and to incorporate all relevant evidence. To achieve these, appropriate clinical evidence needs to be indentified and synthesized, particularly that relating to treatment effects on relevant endpoints. Meta-analysis is the field of clinical epidemiology, which focuses on evidence synthesis. Recent method development in this field has focused on the particular needs of economic evaluation to incorporate all the relevant evidence relating to all management options.

Meta-analysis is the process of using statistical techniques to synthesize the results from separate but related studies in order to obtain an overall estimate of treatment effect. Traditionally, randomized clinical trials (RCTs) have been meta-analyzed by combining results or data from a series of trials comparing the same two treatments. This has been referred to as pairwise meta-analysis. This form of analysis has a number of limitations. For example, it may exclude trials that potentially provide indirect information regarding the treatment effect of interest. This may lead to it being impossible to estimate a treatment effect or to a potentially important information being excluded from the analysis. In addition, where there are more than two treatments of interest it can be hard to interpret the results and associated uncertainty of a series of separate pairwise comparisons, particularly where the results of the individual analyses appear to be contradictory.

Network meta-analysis is an extension of pairwise meta-analysis that provides estimates of the relative effectiveness of two or more treatments derived from a statistical analysis of the data from a set of RCTs, where the trial comparisons form a connected network. The estimates of relative effectiveness, alongside estimates of uncertainty, based on a systematic synthesis of the available RCT evidence, are potentially an important component of medical decision-making.

The uncertainty in an adjusted indirect estimate can be estimated as the sum of the variances for each of the component direct estimates as these can be treated as independent random variables (coming from separate RCTs). For example, var(LORAB) =var(LORAC)+var(LOR+). The standard error and 95% confidence interval can then be derived from the variance estimate. It should be noted that estimates of uncertainty calculated in this way only reflect sampling error and do not take into account the uncertainty as to whether the constraint LORAB= LORAC– LORBC holds for the particular set of trial data. Estimates of uncertainty estimated in this way could be seen as representing the lower bound of uncertainty associated with an indirect comparison.

In a network meta-analysis, estimates of treatment effect are made that comply with the constraint δAB =δAC -δBC on the scale being used for analysis and best fit the observed trial data. These estimates may be obtained using the Bayesian Markov chain Monte Carlo or maximum likelihood methods.

The constraint that δAB =δAC-δBC has been referred to as an assumption of consistency (direct and indirect estimates are consistent), exchangeability (e.g., if treatments were exchanged between trials the estimated treatment effects would be the same, allowing for random variation), or transitivity (the relationship δAB= δAC-δBC is transitive, e.g., δAC =δAB + δBC ).

Although it is common to refer to an ‘assumption’ of consistency in an indirect comparison, it is unlikely that it is believed that the relationship δAB = δAC – δBC holds perfectly across a given set of trial data and that direct estimates comparing treatments A and B, if they became available, would conform perfectly (allowing for random variation) to indirect estimates. Rather, the consistency relationship is an approximation that allows us to make useful predictions based on the available data.

The assumption of consistency can be applied on different scales for the measurement of treatment effect. For example, on the log relative risk (LRR) scale (LRRAB = LRRAC – LRRBC) or the risk difference (RD) scale (RDAB = RDAC – RDBC). These assumptions of consistency are mathematical identities for a single RCT that include treatment A, B, and C (see Figure 1). However, they are not for independent trials comparing A and B, B and C, and A and C. For a set of independent trials, the assumption of consistency may hold on one scale but not another reflect (see Figure 2). 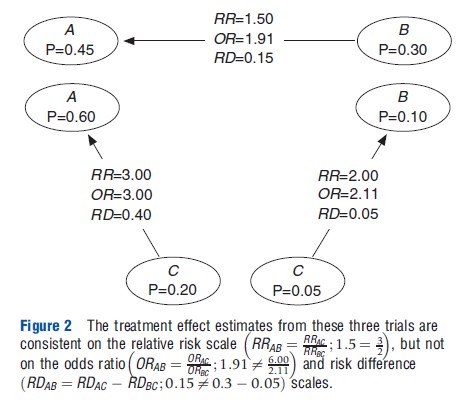 Figure 2 The treatment effect estimates from these three trials are consistent on the relative risk scale but not on the odds ratio and risk difference scales.

Any connected network can be analyzed using the techniques of network meta-analysis. The confidence in the utility of analysis will depend on the empirical evidence regarding the likely deviation of true values of treatment effects from the consistency constraint. If there are material differences between trials in terms of study design (including endpoint definition) or subject characteristics this will reduce the confidence in the analysis.

If there is sufficient overlap in the range of subject characteristics between trials, it may be possible to adjust for the effects of treatment effect modifiers based on an analysis of within-trial variation of response. This may take the form of stratified or regression analysis. Propensity score methods have also been used where individual patient level data analysis is available for some trials and aggregate data for others.

If empirical adjustment for heterogeneity between trials is possible, this may increase the confidence in the results in an analysis based on indirect comparisons.

Finally, when considering the utility of a network meta-analysis, it is important to consider the alternatives. Decisions could be based solely on analyses of direct evidence. However, the available direct evidence may be contradictory and difficult to interpret in a piecewise manner. In contrast, a network meta-analysis will provide estimates that are consistent with readily interpretable estimates of uncertainty.

In many cases direct evidence may not be available, in this case the decision could be deferred until direct evidence be- comes available (although when it does it may be inconsistent with the existing indirect evidence); some assumption of equivalent effectiveness might be made; or the response to treatment in individual trial arms compared. The latter is termed a naive indirect comparison.

Network meta-analysis is increasingly used as a framework for estimating the effects of the full range of relevant options. This article has considered the principles of these methods and, in particular, the underlying assumptions needed for reliable estimates.