Advertising is ubiquitous, found on television and radio, newspapers and magazines, mail and flyers on the windshield, billboards and sports arenas, and now on the computer, and virtually no one is immune to being exposed to it. The American Marketing Association defines marketing, of which advertising is a subset, as ‘‘the activity, set of institutions, and processes for creating, communicating, delivering, and exchanging offerings that have value for customers, clients, partners, and society at large’’ (Grewal and Levy, 2009). To advertise itself is simply ‘‘the action of calling something to the attention of the public especially by paid announcements’’ (Merriam-Webster, 2011). What distinguishes an advertisement from other forms of marketing is that: (1) someone has paid to get the message shown; (2) the message must be carried by a medium; (3) legally, the source must be known; and (4) it represents a persuasive form of communication (Grewal and Levy, 2009). This article will provide a survey of economic views of advertising in general, which will provide the context for a better understanding of the relevance of advertising for health behaviors and health care markets.

Why consumers respond to advertising will be analyzed in more detail in the next section. It is this question that economists ultimately seek to answer in the context of the separate views – that advertising is persuasive, informative, or simply complementary to the advertised product. A brief survey of these different views of advertising is provided in this article, which can help frame the relevance and public health consequences of advertising for health behaviors and health-care markets. The reader is referred to Bagwell (2007) for an excellent, comprehensive review of the economics of advertising, and also Schmalensee (1972) for an earlier take. Elements of each of these views exist in most industries, with variations across industry. A firm may generally view advertising as capital (albeit intangible) that depreciates over time (Bagwell, 2007). Most empirical studies find that most of the effects of advertising are short-lived and that most effects of advertising depreciate within a year. There has therefore been limited empirical evidence for the ‘goodwill effect’ in advertising, causing a firm’s current advertising to be influenced by past advertising (Bagwell, 2007).

The nature of advertising has changed dramatically over time with the advent of new technology and media. Although the means of advertising in healthcare markets can vary across firms and industries (in part because of advertising restrictions), conventional media include magazines, newspapers, billboards, radio, television, and direct mail. With 77% of households using the Internet (Statistical Abstract of the United States, 2009), the computer has also emerged as an important medium for advertising. In addition, firms are also increasingly relying on product placement in movies and video games, and other forms of digital media. Although the volume may presumably diminish the individual effect of an advertisement because it is difficult for a potential consumer to focus on more than one ad at once, online advertising can more effectively tailor ads to individuals.

The number of establishments classified as ‘advertising agencies’ in 2007 was 14 355, up from 13 879 in 1992. Advertising expenditures rose from $2.1 billion in 1940 to $237.4 billion in 2002 (Bittlingmayer, 2008). Note that the North American Industrial Classification System (NAICS) code used by the Economic Census for advertising agencies (which do not include ‘related services’ such as public relations) is 541 810, corresponding to the standard industrial classification code used before 1997 of 7311. According to the Census, ‘‘[t]his industry comprises establishments primarily engaged in creating advertising campaigns and placing such advertising in periodicals, newspapers, radio and television, or other media. These establishments are organized to provide a full range of services (i.e., through in-house capabilities or subcontracting), including advice, creative services, account management, production of advertising material, media planning, and buying (i.e., placing advertising).’’ The intensity of advertising is often measured by the advertising-to-sales ratio. Advertising-to-sales ratios for industries relevant to our discussion are shown in Table 1. The advertising-to-sales ratio for the pharmaceutical industry, especially, understates the level of promotional efforts because it does not include other forms of promotion such as sampling to physicians and other providers and direct marketing to providers. In 2005, the pharmaceutical industry spent 20% of its sales on promotional activities. The Dorfman-Steiner (1954) condition for optimal advertising gives some insight as to why certain industries (or firms) may engage in higher levels of advertising: 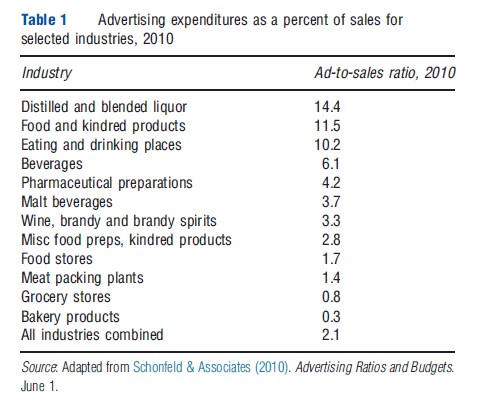 Advertising in healthcare markets is controversial, especially when it has been found to raise the overall market for unhealthy behaviors (for instance, smoking or junk food) or found to contain deceptive or misleading information. Thus, inevitably, advertising must have a certain degree of oversight. Federal agencies that regulate advertising include the Federal Trade Commission (FTC), the Federal Communications Commission (FCC), and the Food and Drug Administration (FDA). Other agencies such as the Bureau of Alcohol, Tobacco, and Firearms also play a role in regulating advertising (Grewal and Levy, 2009). The FTC, established in 1914, enforces the truth in advertising laws and identifies deceptive practices. The FCC, established in 1934, ‘‘enforces restrictions on broadcasting material that promotes lotteries; cigarettes, little cigars, or smokeless tobacco products; or that perpetuates a fraud.’’ It also enforces laws to prohibit or limit obscene, indecent, or profane language (Grewal and Levy, 2009). The FDA, established in 1930, regulates labeling, health claims, and required disclosure statements. Many are unaware that advertising for weight loss products (discussed in Section ‘Conceptual Framework’) is not ‘drug advertising’ according to the FDA; as a dietary supplement, it is classified as a food and faces fewer standards than other drugs (Grewal and Levy, 2009; Cawley et al., 2010).

The article is organized as follows. Section ‘Conceptual Framework’ provides a conceptual framework outlining the economic views of advertising. Advertising in several health markets – particularly those pertaining to tobacco, alcohol, food, soft drinks, cereal, weight loss products, and prescription drugs – is analyzed in Section ‘Advertising in Health Markets’. Section ‘New Directions’ provides a glimpse into directions for future research in the area, particularly surrounding the advent of online advertising and drawing insights from neuroeconomics to the study of advertising. Section ‘Summary’ concludes.