The Pew Research Center showed that Internet usage among Americans has increased by approximately 72% since 2000, with an estimated 46% of respondents using the Internet in 2000 and 79% in 2010 (Pew Research Center, 2011). Residential broadband subscribers increased from 5.2 million in 2000 to 70.1 million in 2008, a 1248% increase over 8 years. With more households having access to the Internet, online advertising, a form of ‘interactive media’ (which also includes mobile phones) has become more prevalent, as is evident in Figure 6. Online advertising was in existence in the early 1990s (Li and Leckenby, 2006), yet as Figure 6 reveals, as recently as 2000 online media suppliers represented less than 5% of total suppliers, compared with 14% in 2009.

As Li and Leckenby (2006) pointed out, ‘‘the internet has capacities to extend the function of advertising far beyond what traditional media are able to accomplish… The expanded function of internet advertising comes from its horizontal integration of three key marketing channel capacities (communication, transaction and distribution) and vertical integration of marketing communications, including advertising, public relations, sales promotion and direct marketing’’ (p. 203).

Figure 7 shows the importance of control ownership by the advertiser or consumer in determining the effectiveness of Internet advertising (Li and Leckenby, 2006). This Interactive Advertising Model (IAM), developed by Rodgers and Thorson (2000), revealed the increased complexity of Internet advertising as compared with advertising in other media. Some ad formats are controversial; for example, interstitial ads, which include pop-ups and pop-unders, could be intrusive and irritating, particularly for individuals who were in ‘search mode’ rather than in ‘surf mode’ (Li and Leckenby, 2006). (Banner ads, by contrast, are usually viewed voluntarily.) New formats adopted by Internet advertisers included three-dimensional visualization and product placement in online games (Li and Leckenby, 2006). There were also virtual worlds in which companies could pinpoint when avatars look at specific ads (Grewal and Levy, 2009). 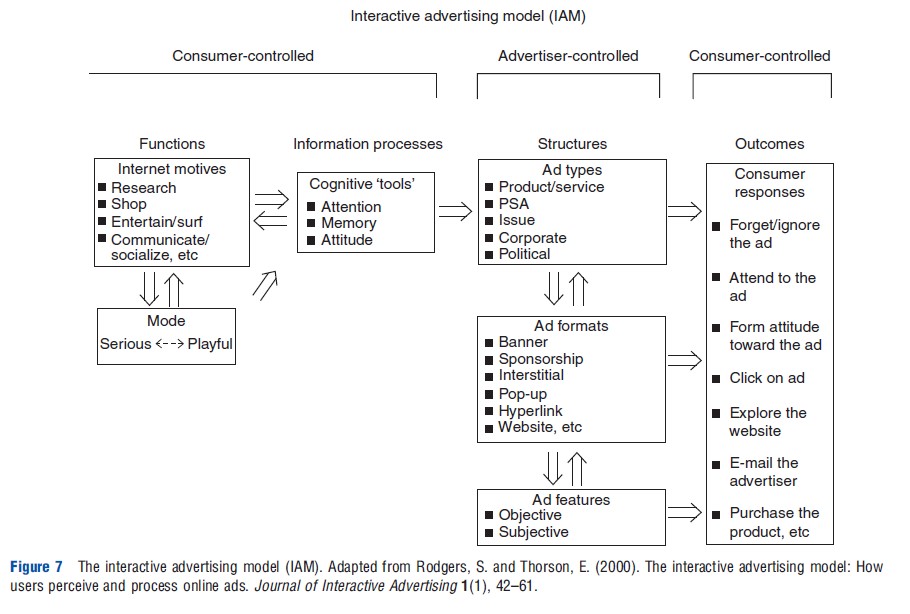 The FTC warns advertisers that if they wish to advertise on the Internet, the same rules apply for electronic advertising as for other forms of advertising (Federal Trade Commission, 2000). Advertising must not mislead consumers or make claims that are unsubstantiated. The FTC summary also sets forth guidelines to protect consumer privacy, particularly relevant for online advertisers.

Economists have integrated insights from behavioral economics and neuroscience in a budding area of research known as neuroeconomics. Bernheim and Rangel (2004, 2005), for instance, presented a theory of addiction based on a neuroeconomic framework of decision-making. This area of research provided a promising new direction for advertising studies on two fronts. First, the persuasive view of advertising posits that advertising impacts demand through potentially spurious brand differentiation, which in turn affects consumer preferences . However, as Bagwell (2007) noted, studies remain ‘‘agnostic as to the underlying mechanism through which advertising shifts tastes’’ (p. 1825). Assimilating insights from neurological research with regard to how decisions are made can help advance our understanding of the mechanisms underlying the response to advertising. Second, relevance for public health and policy requires not just knowing the average population response but also an understanding of how advertising particularly affects behaviors of at-risk individuals – that is, those who impose external costs on others and who are the targets of public policy. For instance, is advertising predicted to affect drinking behaviors of heavy alcohol users or affect junk food consumption habits among overweight/obese individuals? Neuroeconomic models of decision-making, particularly in the context of goods with addictive properties, have distinct predictions in this regard.

Consider the following neuroeconomic model based on Bernheim and Rangel (2004, 2005). Saffer (2011) provided a related discussion on alcohol advertising, and Ruhm (2012) provided a discussion of neuroeconomic models as they applied to overeating and obesity. Individuals have been found to rely on two neural systems to make decisions relating to addictive consumption. One system reflects a rational mechanism (RM), where choices and decisions are based on reasoning and rational cost– benefit calculus. When decisions are made according to the RM, the individual is in a ‘cold state’ and here the standard neoclassical demand model is applicable. The other neural system reflects a hedonic forecasting mechanism (HFM), where choices are based on ‘cravings’ and short-term rewards. The HFM does not involve higher reasoning, and is in control when decisions must be made very quickly. In this case, the individual is defined to be in a ‘hot state.’ The switching mechanism between cold and hot states depends on environmental cues such as advertising, the individual’s addictive stock accumulated through past consumption experience, and other factors.

Under this neuroeconomic framework, advertising would increase primary demand and lead to overall market expansion effects, not just brand-switching effects. The model also indicates that the response to advertising is a learned behavior, and individuals with a higher addictive stock may be particularly susceptible to advertising-related cues. Individuals can also override evaluations of the HFM by exercising cognitive control and asserting dominance of the RM; this points to individual heterogeneity in the response to advertising based on factors that affect the costs of exercising cognitive control.

In summary, it is known from various studies conducted for healthcare markets that advertising can affect both selective and primary demand, can be persuasive and in turn affect tastes and preferences , and can have an average population response that may mask heterogeneous responses across individual characteristics, population subgroups, and along the consumption distribution. It is less clear why these responses are observed. Integrating insights from cognitive psychology, neuroscience, behavioral economics, and other disciplines provides a promising avenue for further understanding these responses.