Some public-health advocates, researchers, and policy-makers recommend that the government go even further, guiding consumers toward healthier diets by altering prices, taxing less healthy foods and beverages and subsidizing their more healthy counterparts. In 2010, the Director of the Centers for Disease Control and Prevention, Thomas Frieden, and two CDC colleagues wrote: ‘‘A tax of 1 cent an ounce on sugarsweetened beverages – about a 10 percent price increase on a twelve-ounce can – would be likely to be the single most effective measure to reverse the obesity epidemic’’ (Frieden et al., 2010).

The success of such a proposal depends on the size of the consumer response to a change in the price of food. Recall from Section 2 that an own-price elasticity shows the percentage change in a product’s quantity consumed, in response to a 1% increase in the product’s price. Economists who study taxation policy recommend that taxes be placed on goods for which demand is inelastic (not responsive to a change in price), because such taxes raise more revenue and do not distort the market equilibrium as much as taxes on goods with elastic demand, causing smaller dead-weight losses from the policy. In contrast, health policy advocates tend to prefer that taxes be placed on unhealthy foods whose demand is elastic (responsive to a change in prices), because these taxes have the biggest impact on food choices. Some clever proposals seek the best of both worlds, by taxing an unhealthy food and earmarking the resulting revenue for health promotion programs.

There is a large research literature that seeks to estimate consumer demand elasticities. A sampling of results from many such studies is presented in Table 1. To interpret such estimates correctly, the reader must keep in mind that food groups are defined differently in different studies. For example, own-price elasticity for a narrowly defined food group with many substitutes (such as potato chips) will be larger in absolute value than the own-price elasticity for a more broadly defined food group with fewer substitutes (such as all types of chips combined). 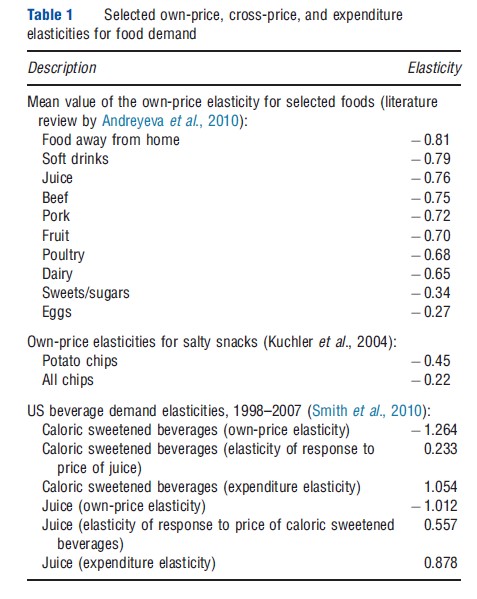 Also, to correctly anticipate the nutrition consequences of a proposed tax, the reader must consider cross-price effects. For example, Smith et al. (2010) combine data on consumer grocery purchases of beverages from the Neilsen Homescan panel with data from the National Health and Nutrition Examination Survey on individual consumption of beverages and height and weight. They first use the variation across places in beverage purchases to estimate a demand system for the effects of price changes for caloric sweetened beverages on consumption of drinks. The corresponding price elasticities are used to predict the effect of a proposed tax on caloric sweetened beverages, not only on consumption of the targeted beverages but also on potential substitutes, including juice. Using their estimates, Table 1 shows that each 1% increase in the price of caloric sweetened beverages might reduce intake of these targeted beverages by 1.264%, whereas simultaneously increasing the intake of juice by 0.557%. After considering both direct effects and such substitutions toward other beverages, the authors estimated that a tax-induced 20% price increase on caloric sweetened beverages would change overall food energy intake by enough to reduce adult overweight prevalence from 66.9% to 62.4% (Smith et al., 2010). The Smith et al. study addresses issues missed in some other demand studies; including careful attention to cross-good price elasticities and differentiating caloric sweetened beverages from diet beverages; and is also clear about what cannot be estimate (the effect of food purchased away from home is naturally absent from data on grocery store purchases).

However, there is still a challenge in applying these or other estimates to predict effects of a large tax change on sugar-sweetened beverages. Many such demand studies make use of time series variation in prices and aggregate data on expenditures, which may or may not be applicable to changes in taxes and individual-level consumption. It is also challenging to find appropriate data to estimate effects fully on complements and substitutes for specific goods, and often the analyst has data only on purchases at grocery stores, or alternatively, consumption data with no corresponding price and location of purchase. One study that comprehensively analyses purchases across categories of goods using household data for 2002–07 while also accounting for local access to particular store types, demographics, prices, and nutrients is Harding and Lovenheim (2013), who simulate the effects of both product specific and nutrient taxes. Yet, ideally data on food at home and away from home would be available along with prices and quantities.

An alternative approach uses individual-level data and tax changes. Fletcher et al. (2010) find that for children and adolescents, tax-induced reductions in soft drink consumption are offset with increases in consumption of milk and other beverages, raising doubt about the value of such taxes in reducing obesity. Unfortunately, one limitation to this approach is that samples in datasets like NHANES are relatively small, and the combined state-year panel are limited by sample design.

Nutrition taxes face several sources of opposition. First, they generally are regressive, with a higher relative budget impact for low-income populations than for higher-income populations. Second, as noted throughout the article, there may be disputes over the nutrition science on which they are based, although one exception with somewhat broader – but far from universal – scientific support is a tax on caloric sweetened beverages. Quantifying the causal effects of prices and taxes on food consumption and health is an ongoing area of research where new approaches and data would be useful. New causal evidence awaits more policy interventions, better data on purchase prices and quantities at and away from home, or both.