The Extent Of Illegal Drug Use

Annual Prevalence Of Illegal Drug Use

Table 1 provides information on the annual prevalence of use for the most important illegal drugs: amphetamines, ecstasy, cannabis, cocaine, and heroin. The annual prevalence refers to the percentage of the population aged 15–64 years who report any use of the substance in the year before being surveyed. The age range varies slightly for some countries. This information is reported for 10 developed countries and the authors refer the interested reader to United Nations (2011) for information on additional countries.

Intensity Of Cannabis Use

Table 2 reports more detailed information on cannabis use for the same set of countries contained in Table 1. Specifically, Table 2 distinguishes between lifetime use, use in the last year, and use in the last month. There is substantial variation in these measures of use both across countries and within countries. The variation across countries is demonstrated by comparing Sweden, where just 21% of the population aged 15–64 years has used cannabis in their lifetime, with the US where 42% of those aged 12 years or older have used cannabis at some point in their lifetime. Similarly, just 1% of those aged 15–64 years in Sweden has used cannabis in the past year compared with 14% of those in Italy. Equally striking is the variation between lifetime and past year use within each country. In the Netherlands, for example, 26% of the population aged 15–64 years has used cannabis in their lifetime but only 7% have done so in the last year. Apparently, cannabis use is not very addictive for a substantial proportion of users (see van Ours, 2005 for details).

Dynamics In Cannabis Use

Although a significant proportion of the population will have tried cannabis at some point in their life, many will simply experiment once or twice without suffering harmful consequences. To assess the degree of risk of harmful consequences, one needs to understand the profile of the duration of cannabis use. In addition, a growing literature provides evidence that early onset of cannabis use has especially harmful effects on health and life outcomes. Therefore, in this section, information on the dynamics of cannabis use, including age at first use and the duration of use, is provided.

Figure 1 shows typical patterns in the dynamics of cannabis use derived from a sample of Amsterdam residents (van Ours, 2005). Figure 1(a) provides information on the uptake of cannabis and Figure 1(b) provides information on quitting behavior as a function of the duration of cannabis use. The first graph in Figure 1(a) shows the hazard rate for starting cannabis use, defined as the probability of starting cannabis use at each age conditional on having not used up until that age. As can be seen from the graph, uptake typically occurs between the ages of 15 and 25 years, with clear spikes in the rate of uptake at ages 16, 18, and 20 years. The starting rate for ages greater than 25 years is small. This means that, if a person has not started cannabis use by the age of 25 years, they are unlikely to do so at a later age. The second graph in Figure 1(a) shows the cumulative starting probability. This is defined as the proportion of individuals at each age who have started cannabis use. The cumulative starting probability shows that 10% of 15-year olds have ever used cannabis. This proportion rises to 50% by the age of 25 years. The slowing in the rate of uptake after the age of 25 years is reflected in the flattening of the cumulative starting probability, which increases from 52% to 55% over the ages of 25–30 years. 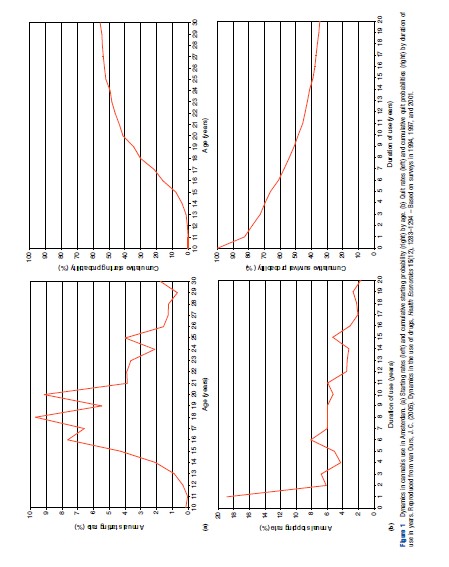 Figure 1(b) shows the quit rate, defined as the probability of quitting cannabis use at each duration of use (measured in years) conditional on not previously quitting, and the cumulative quit probability, defined as the proportion of those who have ever used cannabis quitting at each duration of use. The graph of the quit rate shows that approximately 20% of cannabis users stop using within a year of starting use. The graph of the cumulative quit probability shows that although many cannabis users quit use after a couple of years, a significant proportion do not. For example, 20 years after first using cannabis, between 30% and 40% are still using. Based on these dynamics three groups of individuals can be distinguished; those who never use (abstainers), those who use but only for a short time (experimenters), and persistent users some of whom are recreational users whereas others are addicts. It is important to note that although these graphs were constructed using data on residents of Amsterdam, the patterns in Figure 1 are typical of the dynamics found in other countries.

In addition, the characteristics found in the dynamics of cannabis use are similar to those found for other illegal drugs, although the magnitude of use and the timing over the lifecycle may differ slightly from drug to drug. For example, for the sample of Amsterdam inhabitants on which Figure 1 is based, van Ours (2005) reports that the mean age of first use is 20 years for cannabis, 23 for amphetamines, 24 for heroin, 25 for cocaine, and 26 for ecstasy. In comparison, the mean age of first use for alcohol and tobacco is 17.5 years. He also finds drug-specific critical ages, such that if individuals have not started using by the critical age, then they are not very likely to do so at a later age. As seen above, the critical age is 25 years for cannabis. For cocaine it is 30 years, whereas for tobacco the critical age is approximately 20 years.

It is often found that the age of onset influences user quit rates. The earlier the individuals start using a particular drug, the less likely they are to stop using that drug. Although the general pattern in user dynamics is very much the same across the various drugs, there are also differences between drugs. Cannabis and cocaine use are characterized by relatively low starting rates that begin in the mid-teen years and by high quit rates especially in the first year after starting use. Tobacco use is characterized by high starting rates at a young age and by low quit rates. Once individuals start using cigarettes, they are very unlikely to stop using. Apparently, among the users of cannabis and cocaine there are many experimenters, that is, individuals who use the drug for a very short time but then decide very quickly to stop using.

From the dynamics in illegal drug use it is clear that there are differences between drugs in terms of the duration of use. These differences are related to the variation in the degree of psychic dependence of illegal drugs. As shown in column (1) of Table 4 the degree of psychic dependence is strongest for heroin, tobacco and alcohol, and weakest for cannabis. Nutt et al. (2010) present an attempt to score drugs according to 16 criteria of harm ranging from the intrinsic harms of the drug to social and health-care costs. Based on the criteria they distinguish between harm to users and harm to others. Drugs are scored on a scale of 0–100, with 100 assigned to the most harmful drug and 0 indicating no harm. The points were assigned in consultation with expert groups. The outcome is replicated in the second to fourth column of Table 4. In the second column harm to individual users is represented. The most harmful drugs to users are heroin and alcohol, whereas cannabis and ecstasy are least harmful to the users. The third column presents harm to others and here alcohol is the most harmful followed by heroin; ecstasy is the least harmful. The overall harm score is presented in the fourth column. Overall, alcohol is the most harmful drug and ecstasy the least harmful.

Of course such rankings of harm are not uncontroversial. Caulkins et al. (2011), for example, argue that the harmfulness of a drug cannot be indicated using one number as the harm is more than the harm to the user and spillover effects in terms of harm to others. Furthermore, harms related to drug-related crime, environmental damage, and the cost of police and prisons depend on the legal status of the drug. Finally, the fifth column of Table 4 provides information about the acute lethal toxicity of illegal drugs, i.e., the ‘danger ratio,’ defined as the usual effective dose as a percentage of usual lethal dose (see Gable, 2004). Heroin is the most dangerous drug as the usual effective dose is almost 17% of the usual lethal dose. Heroin is followed by amphetamines and alcohol with a danger ratio of 10%. Cannabis (and tobacco) do not present an immediate danger of a lethal dose.